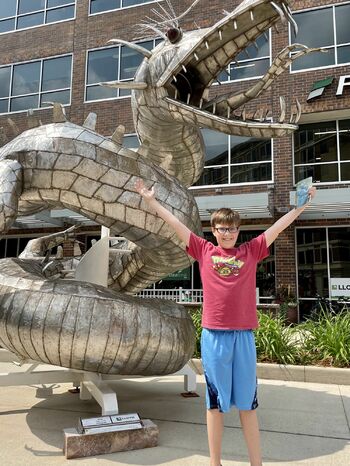 Will you consider a gift today to support SculptureWalk?

At just 10 years old, Charley Hosek quickly memorizes the names of each year's entries, adding to a repository of SculptureWalk knowledge and preparing to give his family and friends tours of the sculptures that line the streets of Downtown Sioux Falls.

“Charley has been obsessed with SculptureWalk for about four years,” Charley’s mom, Nichole, told us. “He can tell you previous years' People's Choice winners and all manner of trivia about them.”

The power of SculptureWalk lies in stories of people like Charley. SculptureWalk has served as a free and accessible introduction to art and fostered Charley’s own creativity as he learns to sketch his favorite sculptures.

When SculptureWalk was founded nearly two decades ago, downtown Sioux Falls was a very different place. It wasn’t a destination for families like Charley’s. SculptureWalk is a great example of how art can revitalize the heart of a community.

Your donation will help grow SculptureWalk’s footprint, compensate artists for their work and increase awareness for this cultural treasure.

SculptureWalk Sioux Falls is an independent 501(c)(3) charitable organization, and contributions are tax-deductible.

Thank you. Your donation has been submitted and you will be receiving an email receipt shortly. If you have any questions, please contact us at info@sculpturewalksiouxfalls.com or call 605-731-2430.
Please correct the following errors:
Site designed by ADwerks and developed by Web Concentrate