“Under Construction” Finishes on Top

Sioux Falls, SD – October 22, 2019 – Continuing in the 16th anniversary of SculptureWalk, the People’s Choice award has been presented to Ohio sculptor, Gary Hovey, for his sculpture “Under Construction.” Created from knives, spoons, and forks, the sculpture depicts beavers building a home for many creatures.

The People’s Choice award is voted on by visitors to SculptureWalk as their favorite sculpture and then purchased by the City of Sioux Falls to become a part of the city’s permanent collection of sculptures.

“It’s an honor to be selected to exhibit in Sioux Falls and SculptureWalk,” said sculptor Gary Hovey, but it’s thrilling to be voted as the ‘People’s Choice. As an artist, you want your work to inspire interest and give people a reason to stop and enjoy your work, but to have them choose your work, with so many great sculptures and artists represented, it’s really an honor.”

The tradition of “People’s Choice” is now it’s 16th year and the winning sculpture is purchased by the City of Sioux Falls and becomes a part of the community’s permanent collection.

SculptureWalk’s Director, Jim Clark, outlines the importance of the “People’s Choice” award as having numerous benefits to the program and the city. “For SculptureWalk to continue to be the best, we need to make sure that our artists are recognized for their great work and at the same time engage the community and our visitors to be a part of our program. It is rewarding to see the past winners displayed downtown and around the city. We really are a city of Sculpture and we’re committed to continuing that tradition in the future.”

While Hovey’s sculptures inspire and entertain many, what people don’t know is his commitment to create great artwork while battling Parkinson’s Disease is even more inspiring. This chapter of his art career began ten years after the onset of Parkinson's disease. "Since I can't work a regular job anymore, making my art gives me purpose. I want my story to inspire others to look for what they can do despite what has happened to them."

You can learn more about the artist here and watch a video of Gary, his work and his life here.

The “People’s Choice” award is just one of the ways that SculptureWalk continues to attract artists from around the world. The “Best of Show” awards honor great work by having the artists peer review each year’s exhibit and 11 artists are singled out for their sculptures. The 2019 overall winner was “Silver Belle” by British Columbia, Canada artist Heather Wall.

The 16th Annual SculptureWalk has been installed in Downtown Sioux Falls!

Started in 2004, SculptureWalk is the largest and most recognized annual exhibit of public art sculptures in the country.

The winning artists receive a cash award made possible by a gift from the Scoular Family Trust and become eligible to be named a Virtuoso Sculptor.

In the Mystic Forest – Bobbie Carlyle

An Angel in Contemplation – Ben Hammond*

Sculptures are judged by their peers for artistic merit and creativity. BEST OF SHOW and 9 BEST OF SHOW II awards will be presented. Artists winning 3 Best of Shows will be honored as a SculptureWalk Virtuoso Sculptor. All Virtuoso Sculptors will receive prominent status and honorariums of $1,500 per year going forward.

The space is located on the second floor of the Washington Pavilion just outside the entrance to the Visual Arts Center, the new SculptureWalk Visitor Center is a great place to either start or finish your tour of the sculptures in Downtown Sioux Falls.

The SculptureWalk Visitor Center is open whenever the Washington Pavilion is open to the public. Learn more here. 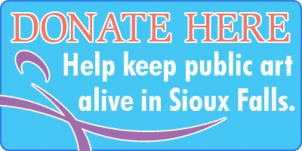 Site designed by ADwerks and developed by Web Concentrate